Working breeds dogs such as German Shepherds need to be educated to their fullest capabilities, and for whichever service they will be used for. To accomplish this, they need proper training, of which there are several dog-training methods available. However, some owners elect to take the training of their working dogs a step further and provide them with Schutzhund training. The following guide will help you learn more about this specialized type of training. 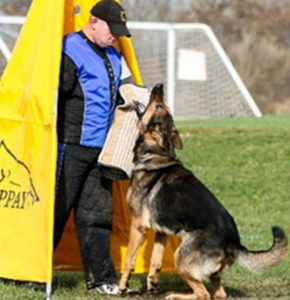 An Introduction to Schutzhund Training

Schutzhund is the most well-known and popular dog sport for working and service breeds. The word Schutz means protect, and the word Hund means dog in Dutch. Schutzhund is also an exciting and rigorous three-part sport which was established as a breed test for German Shepherds over 100 years ago.

A Schutzhund title is required before these dogs can go forward into the Körung, which is a German Shepherd Dog Breed Survey that evaluates breed value. Körung is used for the advancement, improvement and preservation of the breed.

The sport is very much hands-on, and participating countries hold competitions at regional and national levels. In Germany, the biggest trial is the Bundessiegerprüfung (BSP), and it is held annually. Moreover, there is also a world competition held every year under FCI international rules.

History of Schutzhund / IPO in Germany

The original purpose of the German Shepherd breed was to herd and protect sheep. However, the industrialization of Germany saw people utilizing them as police and military dogs. After that, parent club, Verein für Deutsche Schäferhunde (SV), worried that the practice might lead to thoughtless breeding, which in turn, could instill unstable mental states and other negative traits in the breed.

The first Schutzhund trial was held in 1901 for German Shepherds, and it emphasized the ideal working temperament and abilities sought in the breed. Since its inception, other countries and working dog organizations have adopted Schutzhund. The international rules established for Schutzhund are administered by the SV.

History of Schutzhund / IPO in the U.S.

American Schutzhund began when Czechoslovakian immigrant Gernot Riedel brought it to Santa Clara Valley, California in 1957. In 1958, the fanciers that trained their dogs under Riedel organized the first U.S. Schutzhund Club in the nation. Since then, the popular dog sport expanded from the one club in California to thousands of clubs across the United States.

Desirable traits developed and tested in Schutzhund training include courage, desire to work, perseverance, protective instinct and self-control – all of which make the dogs happier and more useful as companions. In addition to those traits, Schutzhund also checks the dog for physical characteristics such as agility, strength, endurance and scenting ability. Breeders can then use these results to determine how and whether to use the working dog to produce the next generation of pups.

Can Other Dog Breeds Participate in Schutzhund?

German Shepherds dominate Schutzhund shows, although the competition has expanded to allow a wider variety of working and herding breeds to participate. Other competitions for working dogs have gotten popular over time, but Schutzhund is still the main breed evaluation test for German Shepherds, as well as Doberman Pinschers, Giant Schnauzers, Hoverwarts and Bouvier de Flandre.

For other breeds besides German Shepherds, they have their own international and national championships. There is also an all-breed FCI International Championship that is held each year. No matter what breed is participating, though, it truly is a case of stringent evaluation and assessment.

Schutzhund training was first known as IPO training. IPO stands for Internationale Prüfungs-Ordnung, which translated into English from Dutch means International Exam Rules. The IPO standard had previously had a different set of rules set forth by the governing body of the World Canine Organization, FCI. Following rule changes in 2004, the standards for IPO and Schutzhund are now virtually the same. Since 2021, both Schutzhund and IPO Training are known as IGP training.

There is a prerequisite and three levels of titling before a dog becomes Schutzhund material. Also, the requirements become more challenging as the dog advances through levels:

After a dog advances through these levels, the United Schutzhund Clubs of America also offers other advanced training degrees and titles.

The 3 Phases of IPO Titling

The IPO titles are made up of three phases, and in each phase, the judge will observe and assess each working dog to determine if they retained the genetic traits for tracking, obedience and protection required. There is some information about these three areas and demonstrations of them in practice below:

Phase 1: Tracking – In this phase, a tracklayer strolls across a field and drops several small items as they go. There is a waiting period, and then the handler signals the dog to follow the track. While the dog does this, they are followed behind by their handler on a 33 ft. leash. The dog indicates each item he finds by laying down with them between their front paws.

Phase 2: Obedience – This phase is conducted in a large field, with two dogs working in pairs. One of the dogs is placed in a down position toward the side of the field, and his handler leaves him there while the second canine works. The working dog conducts different types of heeling, including some instances where they demonstrate heeling amid a group of people. The dog also performs recalls, retrieves, and does a send out where they are commanded to run away from their handler and lie down. After the exercise is complete, the dogs switch places.

Phase 3: Protection – Two people are needed for Phase 3. One is the handler, and the other is the assistant, who is called the helper. The test gauges the dog’s courage to protect themselves and their handler and their ability to stay under control while doing so.

During the exercise, the helper dons a heavily padded sleeve on their arm. There are several blinds placed on the field where the helper can hide. The dog is then signaled to search through and around the blinds for the helper. Once they find the helper, they start barking. The dog must then guard the helper and keep them from moving until his handler calls him off.

During certain points of the protection exercise, the helper simulates attacking the dog or attempts to escape the dog. The dog stops the attack or prevents the escape by biting the reinforced sleeve. When the dog has the sleeve in its mouth, it is commanded to release the sleeve by firmly saying, “Out.”

Since the protection phase is often misunderstood, it’s best to know more by reading about it in this PDF provided by the USCA (United Schutzhund Clubs of America). 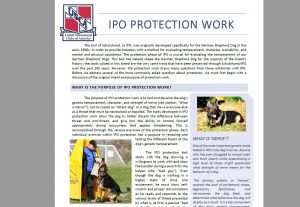 A dog that is a good fit for IPO training should have very solid nerves, be genetically stable and should have inherited these traits from their parents, grandparents and great-grandparents. IPO training generally ensures that the canine has an even and strong temperament. If the canine doesn’t possess these desirable traits, they will often perceive a threat quickly when no real threat exists.

Unfortunately, that lack of sound temperament leads to them easily exhibiting behaviors such as nervousness, extreme excitability and overstimulation. A dog with these traits may not think clearly, and they will respond with fear or even act aggressively when the situation doesn’t merit it. This behavior is the polar opposite of a canine that’s trained for Schutzhund protection.

When Should You Start Schutzhund Training?

The answer to that question has layers, and the answer is also based on the assumption that the dog has the right genetic background to do the work. Protection training should ideally begin around 8 weeks of age. Furthermore, prey development is a necessity, and your pup needs to learn that prey work is enjoyable. Also, the pup needs to learn they will be rewarded for correct behavior.

Hold off on defense work until the puppy is emotionally mature, as too much pressure too early will make them shut down. Also hold off on obedience drills until the puppy’s drives have reached an adequate level.

Assuming that the pup’s prey development has been instilled correctly and sufficiently, their formal protection training can commence around 10 months of age.  This stage is where bite-work commences.

Costs for private IPO/Schutzhund Obedience training can vary, but it is typically around $50 – $65.00 per session. The price is sometimes discounted if a 6–12 months training contract is paid in advance. For instance, 96 sessions that meet 2 times a week could be around $3360.00 total or what boils down to around $35.00 per session.

How to Find a Local Schutzhund Training Club

If you want to find a Schutzhund training club or local clubs in the Chicago area, look for the ones in your area that are associated with the organizations below. You’ll find individual club information listed on each organization's website. Alternatively, you can visit the AWDF website to find out more. 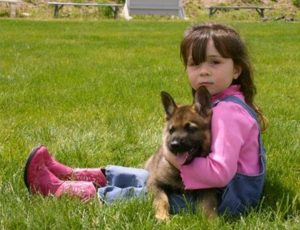 Getting Started with Schutzhund Training

Regis Regal puppies are perfect for Schutzhund training, and we offer this service in the Chicago area. Our specialized trainers can train puppies onsite, but we also offer online training classes for dog owners who aren't able to get to our location here in Spring Grove, Illinois, or don't have access to a dog training expert nearby. If you would like to find out more about which training is right for you and your dog, you can contact us at (847) 721-1908. You can also send us a message using our online form.