Aggression is a topic that most people have heard of, but may not know much about. What does it mean for a German Shepherd to be aggressive? It can range from the dog being territorial and protective to just feeling uncomfortable in their environment. In this blog post, we will talk about how you can fix these types of aggression problems in your pet.

There are several ways you can tell if your German Shepherd (GSD) has a problem with aggression. They may bark, snarl and charge at other dogs on walks or when they see them in the home. This is very dangerous, as it could cause another dog to get injured or hurt themselves while trying to run away from the situation.

Some other signs include:

Always remember that if your German Shepherd is aggressive towards other animals they may need some medical attention as well. Take them to the vet for an examination and to rule anything else out before trying any of these methods yourself.

How to Stop Your German Shepherd from Being so Aggressive

This is one of the hardest behavioral things to fix, but it’s also one that you have control over. If your shep becomes aggressive when they see other dogs on walks or being in a new environment, there are several methods you can try out at home to help them get used to these situations without them getting so worked up, including the Desensitization Method, The Introduction Method, The Routine Method and the Counter-Conditioning Method.

You can try and desensitize your GSD towards a stimulus that causes them to become anxious or aggressive. This means you need to phase in the object/other animals slowly so they barely notice it before progressing up until your pet can see and interact with it without becoming nervous or aggressive.

To do this, start off by taking your German Shepherd for a walk in an area where you know there aren’t any other dogs around, so they don’t feel threatened. Then carry on the same route but stop short of going past another dog’s house— however far away that may be.

Then, when you get to this point, just wait for a couple of minutes so your dog becomes comfortable in the area again before carrying on back home. Do this several times until they are fine with being at that distance from another animal’s house and then progress up to walking past it while still stopping short if they become anxious or aggressive.

Introducing a shy or fearful dog to new people and other dogs should be a slow process.

Introducing Your Dog to New People

Step 2: Next, bring the dog out and let them make the first move—don’t let the new person approach or talk to the dog until the pooch signals that this type of contact is all right.

Step 3: Then, have the person offer high-quality dog treats that you know your shep likes. A good one might be Zesty Paws Calming bites since it soothes and relaxes them.

Step 4: The person should hold out the treat or drop it on the ground nearby. They should not make eye contact with your dog and stand sideways or in a crouching position while they are doing this.

Tip 1: If your GSD continues to be shy or shows fear, do not reward them with treats or this will reinforce their bad behavior and delay progress.

Tip 2: It’s important not to rush the process or you can make things worse; your dog will eventually build enough confidence to approach people and take treats.

Introducing Your GSD to Unfamiliar Dogs

Step 1: Choose a Calm, Neutral Environment that has little to distract or stimulate your GSD.

Step 2: Start out slowly when making your introduction to your new dog’s potential buddy. Keep your distance from the handler and their dog at first.

Step 3: Slowly approach the other dog and handler and reward your dog if they act calm Then, let them sniff and circle around one another. Next, walk azway with your dog.

Step 4: Repeat this process as needed. If you have a shy or fearful dog, it may take several times to build up their confidence enough for them to be relaxed enough around other dogs.

Tip 1: Reward your dog whenever they display confident behavior. This positive reinforcement encourages a positive association when your GSD meets new dogs.

Tip 2: Don’t use tight leashes or pull the two dogs apart. This can cause a negative reaction in your dog.

Tip 3: Start with a familiar, well-behaved canine. This precaution helps the process along by introducing your animal to a socialized, confident dog. It will also teach you the best way to handle these types of socialization episodes.

If your dog has been aggressive towards other dogs on walks for a while now, then it’s likely that the situation is going to be difficult to change as they become more and more used to seeing other animals.

In this case, you want to use a routine where every time another animal appears in their line of sight or when you are out walking them, you’ll make a noise or an action that means they need to pay attention.

Once you’ve done this, give them lots of praise and treats so it becomes associated with something pleasant for your pet. The idea is for your German Shepherd to learn the association between another animal appearing on walks/in their environment and receiving good things from it happening.

They’ll soon work out that if they stop being aggressive towards other animals, the good things will keep on coming. This is a great way to train your pet so it can be rewarded for not acting inappropriately instead of them getting chastised for doing something wrong.

You can also try and change your German Shepherd’s association with another animal when they see them on walks or in the home. This is done by giving them a treat every time they react positively to seeing another dog so that it changes their thoughts about this stimulus. You need to do this until you’ve changed their opinion of other animals, so they are now associated with something pleasant.

It’s best to use small treats when doing this as too many might make them sick or push them over the calorie intake for the day. You can also combine counter-conditioning with rewarding your pet for not reacting aggressively/nervously every time another animal appears so that the change happens in a speedier manner.

Dog training classes work really well for curbing aggression and other undesirable traits in your dog. Virtual dog classes, where dogs can learn new behavior and impulse control online, fit into busy lifestyles and you can take them anywhere. 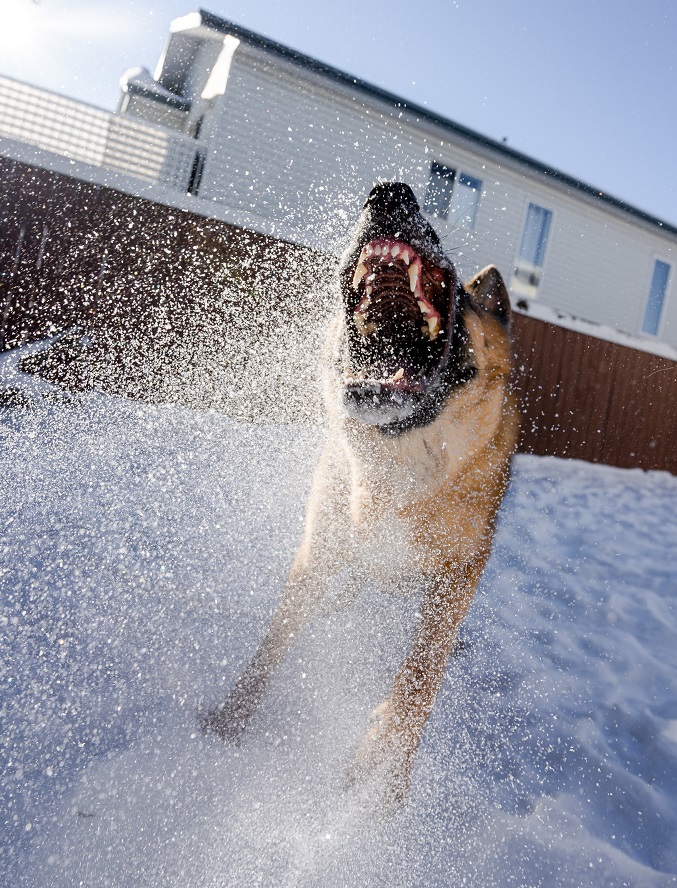 There are a number of reasons why your German Shepherd might be acting aggressively towards other animals, and it can even depend on their breed. Some dogs that have been bred to fight or guard may display aggression issues, while others may simply not like the look of another dog and want to get away from them as quickly as possible (which is still considered ‘aggressive’ by some experts).

The most common reasons for this type of behavior include:

Take a Class with Your German Shepherd

Regis Regal offers both in-person classes and online classes to help you socialize and train your dog. Our course is designed for both novice pet owners as well as more experienced GSD handlers who have had trouble in the past with these wonderful animals. Call us today at (847) 721-1908 or send us a message to learn about our German Shepherd classes.