German Shepherds are one of the world’s most popular dog breeds. They’re smart, loyal, strikingly good-looking, and are easy to train. However, did you know that this breed comes in a wide range of different colors, and one of the ones we are listing here is the rarest color of all? It’s true, and in this blog post, we will discuss some of the different colors of German Shepherds and the commonness and rareness associated with each one. 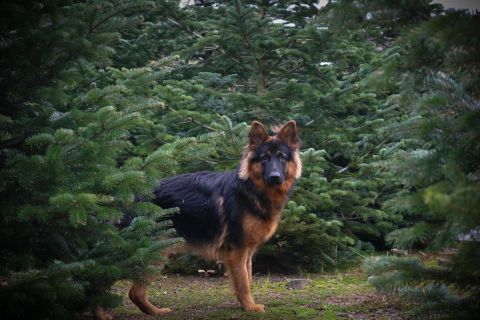 Genes are Behind the Colors and Patterns of Dogs

Genes play a role in the colors and patterns that all dogs sport. With dominant genes, you’ll get the most prevalent color of black and tan followed by others listed here that aren’t as common.

Meanwhile, German Shepherds that have rare colors get them as the result of recessive genes. Many rare-colored varieties are produced by specialty-designed breeding programs, but they do sometimes show up in litters of regular breeding programs. Since these types of dogs are so hard to come by, you will unlikely find one at a rescue center or shelter.

The Most Common Color for GSDs

If you wanted to see some of the different coats our dogs have you can visit our adult dogs page here.

The original color of this working dog is black and tan, and they represent the most common color for German Shepherds. In addition, they make up around 63% of all GSDs registered with the AKC (American Kennel Club). You’ve probably seen this color in movies, on television shows, and even walking down the street.

Black and tan is the signature color for the breed, and it’s been the most prevalent since they were first officially registered back in Germany at the turn of the 19th century. Their lineage comes from their ancestor Horand von Grafrath, who was a little darker than the modern black and tan GSDs.

Black and tan is a very popular combination that has been favored by many dog owners for years. This type of GSD has a rich brown underbelly with a black overcoat. The paws and tail tip can also be found in this color, too. These dogs typically have a brown nose and eye rims that match their coat color.

Black and red-colored GSDs get their coloring from the color gene pheomelanin. While not as common as black and tans (They only make up about 14% of all registered dogs), they are the next most popular color of GSD and have the same saddleback and black mask that the black and tans do.

Black and red German Shepherds have a black base with rich, rust-colored markings on their back, front legs, ears and even around the muzzle area. Their underbelly is usually cream or tan in color.

The black and silver is a genetically recessive color because it only occurs when breeding two dogs that carry the same genes for this type of coloring. This variety of German Shepherd can come in many different shades of gray, ranging from nearly white to a deep charcoal color. It’s characterized by its silver-colored coat with black ticking throughout. Often, they’ll have a dark grey mask on their muzzle and around their eyes.

This color is quite rare, so if you see one out in public don’t be surprised. They also get their coloring from the gene that produces pheomelanin.

As their name suggests, these dogs are black with a cream-colored underbelly. The color of the dog’s coat will depend on whether they carry brown or blue eyes and nose pigment. If you see two German Shepherds that look nearly identical, except for one does not have any rust coloring around its ears, then it is probably a black and cream.

Although you may not expect it, pure white German Shepherds descended directly from the same German Shepherds that black and tans did. The recessive gene that causes them to be white has been present in the genetic makeup of their original German Shepherd ancestor. Not to be confused with albinos, these dogs, with their luxurious white coats, look similar to Golden Retrievers with erect ears.

Many German Shepherd owners, including U.S Army soldiers serving overseas, have purchased these dogs to use as guard dogs because of their strength and intimidating appearance; however, the white color makes it difficult for them to blend into surroundings as dark colors can do.

White German Shepherds aren’t prone to having genetic disorders, but history hasn’t been kind to them. Because of this, many people today erroneously believe that these snow-colored dogs are flawed genetically.

A solid black German Shepherd’s official name is a blue-black shepherd. They are so named because they have black fur with a rich bluish hue, and this bluish-black coat extends all the way down to their paws.

While all types of animals get a bad rep from being black (really, they are one of the last colors of animals to be adopted at the pound!), their ebony hue has no bearing on their temperaments and character. In fact, those who own black German Shepherds will tell you that they are very smart and loyal. While blue-black shepherds are extremely popular among pet owners, they only represent only 6.8 percent of all German Shepherds. 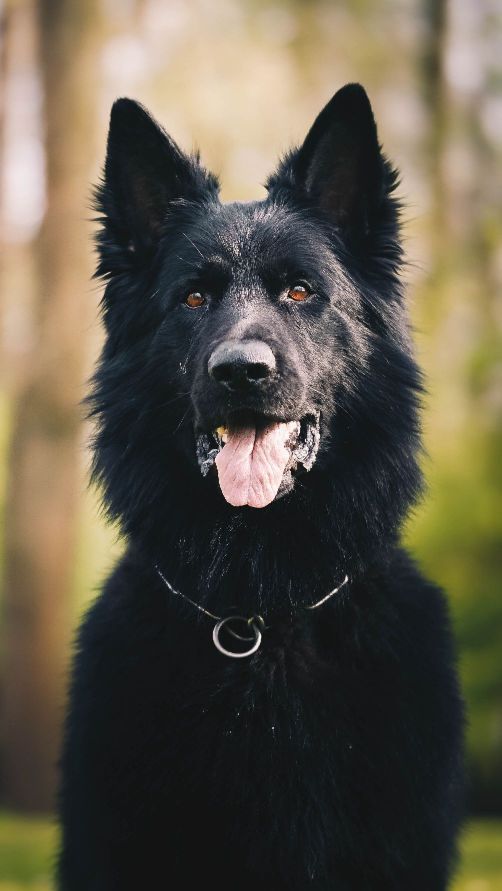 One of the rarest colors for German Shepherds is liver, and only a few genetic combinations can produce them. Liver GSDs have a black nose and eye rims just like the standard black and tan coat does. They have a deep reddish-brown coat, and amber-colored eyes and are extremely eye-catching. They are mostly solid-colored but they also come in liver and white and liver and tan colors.

Blue-colored German Shepherds are extremely beautiful dogs, and with their golden-brown to amber-colored eyes, they look almost magical. The blue or grey of their coats comes from a recessive dilution gene, but they are not predisposed to any health problems any more than the prevalent black and tan variety.

Isabella GSDs have a dilute coat color, and the liver gene blocks all of the black pigment that the parents pass on to their offspring. As a result, these dogs won’t have any black pigment on their eye rims, noses or paw pads. Isabellas will typically have light blue or hazel eyes. 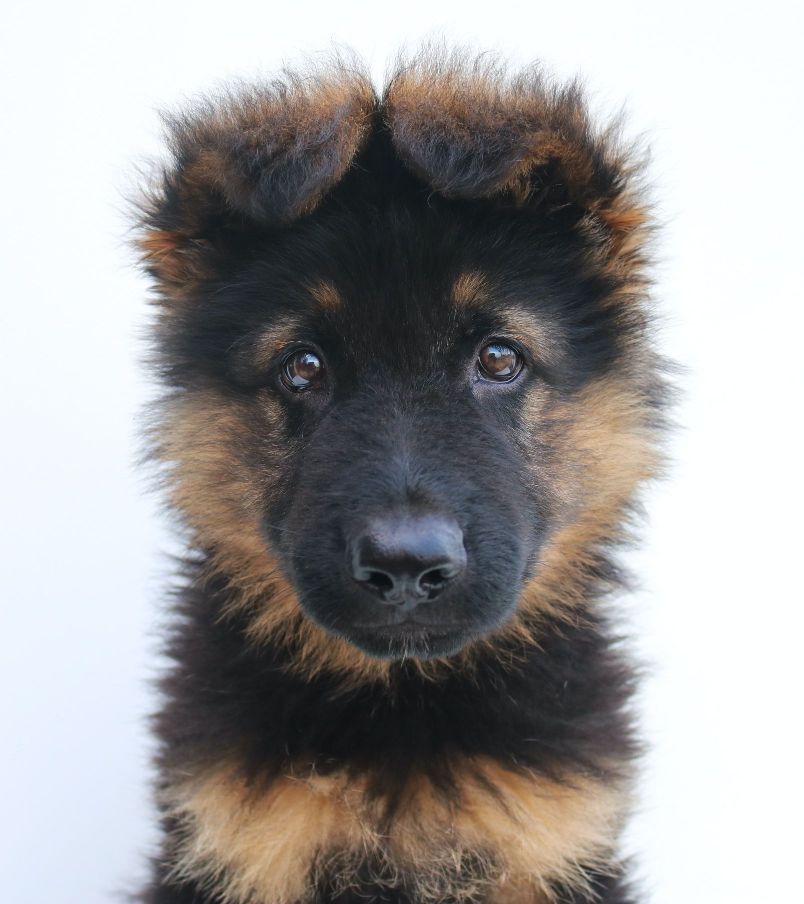 German Shepherds have either a medium coat or a long coat. They both are double coats, having a denser guard layer over a softer undercoat.

Additionally, long coats are known as “fluffies” and medium coats as “shorthairs”.

The club adds that strong, rich colors are going to be favored, and washed out off-colors, blues, livers and pale coats are serious faults. White dogs are disqualified.

While white GSDs are ineligible for competition according to AKC standards, which state that all German Shepherds must be able to work, The United Kennel Club recognizes them, allows them in dog shows and stands in opposition to the AKC’s stance.

They point out that German Shepherd dogs come in many colors, including white. They also note that color is of “secondary importance” and has no bearing on a dog’s character or ability to work.

Unlike white and light-colored GSDs, the AKC recognizes and allows black German Shepherds to compete in shows.

Regis Regal German Shepherds: Beautiful on the Inside and Out

While color is interesting and desired by many, bear in mind that German Shepherd dogs are working dogs that are mainly bred for a specific purpose. At Regis Regal, we breed, raise, and train German Shepherds that are not only beautiful on the outside but also have a good temperament and intelligence that makes them anything from a great family pet, to a therapy dog to service dogs for veterans and more. Our GSDs are gentle and kind, highly intelligent and have been immaculately educated.

If you are in the Chicago area and would like to find out more about our world-class German Shepherd puppies, adults, therapy dogs, estate dogs and service dogs, please contact us at 847-721-1908. Alternatively, if you don’t live locally, we offer a private courier service where we can deliver your German Shepherd to your residence. The utmost care will be taken with them during the journey by the courier.