If you have decided to get a German Shepherd, you are not alone. They have become one of the most popular dog breeds in America, which is both good and bad. It’s good because these wonderful and loyal dogs are now getting the recognition they deserve. It’s bad because popularity has made the breed a favorite for puppy mills. Before you decide on a German Shepherd puppy, there are a few things you should know about the breed and how much you can expect to pay to buy a puppy and care for it.

One of our recent German Shepherd puppies

How Much Do AKC German Shepherd Puppies Cost?

This is probably one of the first questions you asked yourself when you decided to get a GSD, but answering it is not easy. The cost of a German Shepherd puppy will vary depending on a number of factors, and, as with most things in life, you get what you pay for. If you are looking for a well-bred, loving and loyal family pet, you can expect to pay at least $4,000. However, that figure can rise significantly for a puppy with successful show or working dog lineage.

If your German Shepherd puppy will help you to cope with a disability or provide you with emotional support, private health insurance companies won’t help you cover the cost.  If you have a Flexible Spending Account (FSA) attached to your health insurance policy for buying a service dog, you can use it if your doctor determines it is medically necessary. Besides that, there are grants and charities available that pair owners with a service dog at low or no costs.

Visiting a local animal shelter could be the least expensive way to get a German Shepherd puppy, but you can expect your search to be a long and frustrating one. While you will only be expected to pay for vaccinations or asked to make a small donation, you are far more likely to find an adult dog than a puppy. This could make training a challenge as undesirable habits have to be broken and temperament can be unpredictable. I wrote about issues adopting a German Shepherd that you might find useful if you were considering taking this route.

If you see German Shepherd puppies offered at a price that seems too good to be true, you should proceed with extreme caution and have a vet check the puppy you choose before any money changes hands. This is because, like all pedigree dogs, German Shepherds are prone to certain medical issues.

These issues include hip dysplasia, arthritis, degenerative myelopathy and exocrine pancreatic insufficiency. Experienced breeders know this and take great care to avoid these problems, but puppy mills are only interested in breeding as many dogs as they can and selling them as quickly as possible. Few things in life are as precious as peace of mind, which is why you may be wise to get your German Shepherd puppy from a breeder that offers a lifetime health guarantee, like Regis Regal does.

Once you have brought your German Shepherd puppy home, the fun really begins and the costs start to mount. German Shepherds are large dogs and they love their exercise, which means that your puppy will eat a lot. You can also expect to pay several hundred dollars each year to cover immunizations, laboratory tests and pest and parasite treatments. Then there are obedience classes, leashes and collars and lots and lots of treats and toys.

What Is an AKC German Shepherd?

The German Shepherd is classified as a herding dog by the American Kennel Club. The first GSD was owned by a former Prussian cavalry officer who founded the Verein für Deutsche Schäferhunde, which means the German Shepherd Society, in 1899.

German Shepherds, which are sometimes called Alsatians, are known for their strength, intelligence, obedience and trainability. The traits that make them great family pets also make them ideal working dogs, and they are used by police departments and armies in just about every country.

German Shepherds stand between 22 and 24-inches tall and weigh between 65 and 90 pounds. They live for about 14 years and are extremely loyal.

Their walking gait is relaxed, but they can reach great speeds when they run. German Shepherds were originally bred to protect livestock from predators, and they have been known to sacrifice themselves without hesitation to save their loved ones.

A Brief History of the German Shepherd

German Shepherds are loyal, intelligent and hardworking, but when you adopt one of these pups, you should be aware of its history. The introduction of German Shepherds to the United States started in the early 1900s. Since then, a lot went into the breeding of this loyal, hardworking breed and making them what they are today.

Czechoslovakia was influential in developing the bloodline, imparting their own unique tweak on the breed. Europe has focused on the breed’s working ability and temperament, while physical characteristics play a bigger role in the United States.

Be mindful when adopting a puppy that many of the original bloodlines are now severed, resulting in undesirable traits. Because of this unregulated breeding practice, America, especially, has issues with undesirable characteristics and authenticity.

Admiration and demand for the different breeds grew, resulting in the following 5 major types of German Shepherd Bloodlines:

You may have encountered East DDR (Deutsche Demokratische Republik) German Shepherds if you’ve seen them working with the police in K-9 Units or seen them sniffing for contraband at the airport.

Eastern sheps are perfect for these tasks and much more since they are intelligent and bred to have high energy and high drive. In fact, an East DDR dog from a good bloodline is always on point and looking to get involved in the next task.

The characteristics that make East German Shepherds such good soldiers don’t make them a “good boy” or “girl” in the home. They rarely make suitable pets, and we recommend against trying to own one as a family companion. While any pup is trainable, Eastern German Shepherds require extensive handling and training, as they are solely bred for work and protection.

Your puppy will start out small but will grow into an extremely powerful dog. Little to know no margin of error exists when it comes to handling an adult East German Shepherd of this class. In other words, it’s best to play it safe and leave the adoption of these big fellas to the professionals.

They are a combination of many bloodlines, resulting in a more substantial build and shorter head and muzzle. These dogs also slope in the back and hindquarters.

Because of the lack of regulation pertaining to Health and Temperament, the American Shepherd has been vastly over-bred. This has resulted in tremendous hip and elbow dysplasia along with Leukemia.

Dogs belonging to the West German Show Line are typically darker than American dogs, and their back forms an elongated and bowed “u” that is known as “roaching.” Von Stephanitz, the father of the breed, envisioned a stronger temperament than was realized, and their will is more malleable than with working line dogs.

The German registry (Verein fur deutsche Schaferhunde) requires more rigorous oversight in their breeding. For instance, along with their show title, the dogs must be cleared for a working title and good hip and elbow health. Because of this, the West German bloodline is typically healthier than American ones.

One of the lesser-known breeds of GSD is the Czech German Shepherd, and many people consider them an offshoot, or even the same breed as, the East German Shepherd.

These dogs have an amazing history, and breeding endowed them with their own unique traits. Its beginnings stretch as far back as communist Czechoslovakia in 1899, and they were employed by the Czech Army border control agency.

When Germany was divided between the East and West, Czech Shepherds became more common. However, they didn’t flourish until Germany reunited the two divisions in 1989.

Czechs tend to be leaner than the other working bloodlines and are quite nimble since they were once prey driven.They also tend to mature the slowest of the working lines. While Czech Working Lines German Shepherds are sometimes kept as pets and have calmed throughout time, they are still very hard-wired to work.

German Working Line German Shepherds are charming, and they are also worker bees at heart. These western shephs are also thought to be the closest to the original breed created by the Germans.

And, since they are revered as a working bloodline – a focus is emphasized on their personality and temperament – much more than their appearance. This practice results in a much healthier and dynamic breed for the western bloodline.

Because of their even temperament and more, it’s best to adopt from the West German Working bloodline if your plan on making your GSD a family companion. This type of GSD is also used for special needs, emotional support and more.

Known as “protection you can hug,” Regis Regal produces West German Sieger dogs. These canines are the best choice for companionship and family security if their owners invest enough time in them. 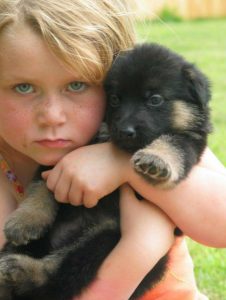 One of our former puppies

You may think that you have to find a puppy at a local breeder, but that is not necessarily true. Regis Regal is located about an hour’s drive from Chicago, but we have used a special courier service to deliver puppies to happy owners in Arizona, New York and Florida – and wherever else you may be based in the US. We have also been named a Breeder of Merit by the American Kennel Club, and we offer a lifetime health guarantee on all of our German Shepherd puppies.